Howdy, I love to build stuff.  'been doin' it since I was.... hmmm, well I can't remember that far back, so its been a while.  Its probly my favourite thing to do (well, that and exercising) 'cause if I build something it never yells at me for no reason, or eats all my french fries!  hee hee, well who knows why I like it so much, I just do.  Maybe its just fun when ya have a knack for makin' stuff work.  Here's a couple things I've made over the years, but there's lots more.  Oh, and I couldn't bring myself to put some of the more complex ones here 'cause it just wouldn't do them justice, so if ya wanna see those ones you'll have to come over and look for yourself!
Feel free to ask me any questions you may have, e-mail me at:  [email protected]
or ICQ me at 29020835 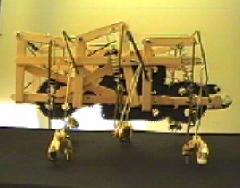 2.  This little guy is a slug, slow moving, but it gets there eventually.  I built this machine in Jan. 1999.  It took about an hour to build and is about 6'' long.  I plan to spend another hour on it to implement an extremely simple steering mechanism I though of.  It runs on 3V (2 AA batteries).

3.  This thing is part fish, part boat (radio controlled, and solar powered).  Kind of a precursor to a fish submarine I've been thinking about, well, I guess it wouldn't be a submarine if its a fish, ok, so it'll just be a radio controlled fish.

This is the first Fish-boat...  It worked, but not as well as the next one will, so he's toast!

4.  This is the frame of a turtle.  After seeing a turtle walk, I thought the motion would be fairly easy to duplicate, and after 2 hours I completed this guy in Jan. 1999. The design is very simple, and with the addition of a few other parts I plan to give it the ability to steer.  It is 6'' long and runs on 3V (2 AA batteries).
top

5.  This dude is kind of a spider kind of thing, 'cept it only has six legs so i guess its a bug.  I got the idea of building a 6 legged walking robot that can change direction without turning around from a cartoon.  heh heh, I like cartoons.  Anyway.  This thing can walk in a straight line, and can immediately walk in any other direction simply by rotating a part on the inside of it.  You can see it turning in the video.  Its better than a tank turn, since it doesn't have to waste time turning itself around.  It weighs about 4 lbs, and is 50cm tall, and 70cm from one leg to the oppoite one.  I still need to rubberize the feet so they don't slam so hard, but whatever.


6.  I made this pretty recently (around Mar. 2001), but the original popsicle stick version has been around, in a state of miserable disrepair, for about 7 years.  Well, I decided to build this steel one and make it radio controlled, and put a wireless video camera on it.  You know, to terrorize the cats.  heh heh.  It weighs about 20lbs.  A good percentage of that is a Lead acid battery.  Its 30cm tall, and 70 long.  As you can see a little in the video it actually handles not too bad.  It has less than a 2ft turning radius, and hasn't fallen over yet, it'll even stay up stepping on golf balls, or going up a 1.5inch step.  :-)   There are all kinda of details you might not notice too, like how the feet reach their highest point right above where they step down... so it can get over things easier.

7.  So... ya.  I guess I've been neglecting this area for a while.  Not to disappoint, I've got one of my newest creations to show.  Its a spider tank.  I made almost all the pieces out of plastic.  Its this 2 part exopy-ish plastic.  That is you mix 2 liquids together, then in about 10 minutes it solidifies into white plastic.  I made molds for most of those parts with a similar rubber product.  That way as long as I could make the origina piece in the right shape.... using anything somewhat solid (vlay, cut up plastic pieces, chucks of crap off the floor, gum.... whatever) I could mold it then pour plastic into the mold and make solid plastic parts.  yippee.  I've managed to get the engineering of this design worked out to a pretty simple design, and I'm very happy with it.  Well, with no further adooooo, here it is!  Oh, and it was completed some time in early 2006.  ...and like isn't there a way to get paid for making stuff like this!?


Mail me something [email protected]